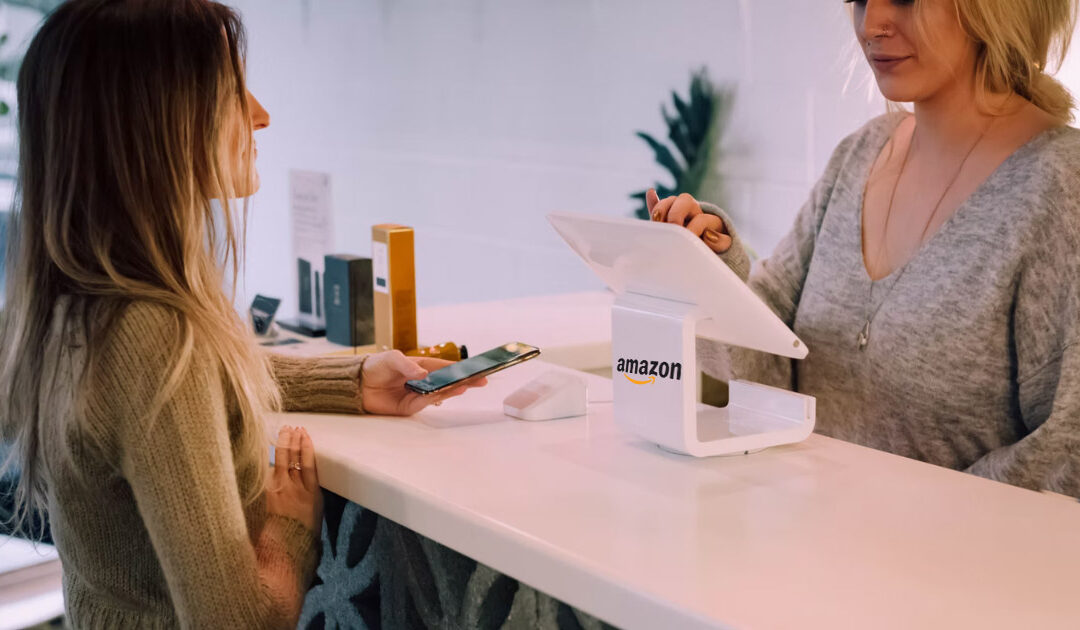 How would you define a “marketplace”? What should or shouldn’t a marketplace be able to do different than a typical retailer? Where do a marketplace’s fiduciary and ethical responsibilities lie between their consumers, merchants, and their own bottom line?

Can marketplaces pick winners and losers? Can they offer those winners premium placement and early access to new features? What if they own those winners?

Should marketplaces offer incentives to install apps or use payment processors that they own while taxing those who don’t?

This week’s Shopifreaks newsletter explores some recent happenings in the world of marketplaces and how their partnerships and acquisitions could be giving them an unfair advantage.

1. Amazon is launching a Point of Sale (POS) system

Amazon is developing a new type of POS system that can handle both online and offline transactions and link to other Amazon services including Prime membership, Amazon One hand-scanning biometric payment solutions, and Flex delivery, according to an internal document.

The new Amazon POS system was developed under an internal Amazon team called Project Santos which is tasked with going after Shopify’s core audience of small business merchants.

The move will position Amazon to compete with Shopify, Lightspeed, PayPal, Square, Toast, Clover, and other POS systems that cater to small businesses. The global POS software market was worth $9.26 billion in 2020, and is predicted to reach $19.56 billion by 2028.

An estimated 29% of the 31.7 million small businesses in USA operate entirely in-person, and Amazon could attract these sellers into their ecosystem through offline sales tools such as their POS. In 2018, Amazon only had about 1 million small business sellers on its marketplace, so the company has a large addressable market to work with.

Amazon declined to comment about the internal document, so at the moment we can only speculate what their POS system could entail. I’ll give it a go…

Amazon could potentially consolidate offline sales – the way that it did online sales – through direct access to brick and mortar sales data and inventory analytics. Imagine this on a product listing…

The scary part of that equation for small business sellers is what’s on the other end of those benefits. Amazon has historically been ruthless when it comes to using merchant sales data to form direct relationships with wholesalers and manufacturers, as well as create their own line of products. A widely adopted POS system would give Amazon access to small business offline sales data that would in turn allow them to discover which products sell best in particular geographic areas and micro-scale their local operations to compete with the small business merchants they service.

In a few years, will we be hearing stories about how Amazon’s 4 Star and Go stores are undercutting a mom and pop’s best selling items at a price unobtainable by the small local retailer, after using their sales data to determine which items to sell in that local market?

Hit reply or tweet at me and let me know your thoughts about where Amazon POS could lead small businesses.

Shopify has reportedly invested $30 million into Yotpo, bringing the total amount raised by Yotpo to $436 million since it was founded in 2011. The two companies have also entered into a strategic partnership that will position Yotpo as one of the early launch partners for new Shopify development features. The companies will align product development roadmaps moving forward to create connected shopping experiences between their overlapping customers.

My questions are — how does this fare with other app developers on Shopify’s marketplace who offer competing apps? Investing in Yotpo and offering early access to development features gives Yotpo an advantage in the app marketplace by being able to develop and release features before anyone else. Does that violate any fiduciary or ethical responsibilities that Shopify has towards their developer partners?

Shopify’s app-based ecosystem has its benefits to the platform and their merchants, but it’s a double edged sword because it creates a fiduciary and ethical responsibility to a community of developers that could at times be at odds with the best interest of their bottom line and/or their merchants.

One of those times is when Shopify chooses to either pick a winner, as is the case with Yotpo, or compete with their developers directly by adding core features to Shopify’s platform that were previously only available to merchants via 3rd party apps — recently such as Shopify Mail & Shopify Chat.

Shopify investing or acquiring apps and positioning them with early access development advantages is comparable to Amazon launching a private label version of their merchants best selling items. It unfavorably benefits the company’s vested interests over that of their development partners in Shopify’s case or merchant partners in Amazon’s case.

This isn’t to say that Shopify shouldn’t invest in their best performing app makers, as they also have a responsibility to their merchants and investors to offer the best platform possible. However it’s a gray area between being a marketplace and a product or service provider that many companies in Big Tech are finding themselves in. Which leads us to our next story….

What are your thoughts about the Shopify + Yotpo deal? Hit reply or tweet at me and let me know.

3. Apple isn’t a monopoly, but it must allow 3rd party in-app payment in their iOS apps

By now you’ve read the news about a federal court’s decision to let app developers direct users to other payment systems — a tentative outcome in the Apple vs Epic Games battle. It was big news this past week covered in Variety, The Hustle, NPR, and other major outlets.

If you’re out of the loop, here’s a quick recap:

So does this mean that Apple has lost control of its app marketplace — an ecosystem that brought in $643 billion in 2020? Not quite…

Apple may have lost their ability to deny other forms of payments, but the company still has broad legal authority to write its own rules for the App Store, including requiring commissions on sales instead of payments.

And that’s one possibility of what we could see with Apple if too many app developers decide to steer customers away from Apple’s in-app payment system — a transaction fee placed on the sales themselves instead of the payments. A move that would probably land them right back in court.

As I’ve reported in previous Shopifreaks editions, right now India is in the process of determining what “marketplaces” can or cannot do (such as sell items that they manufacture or promote brands that they have ownership in above others). USA might be finding themselves answering similar questions sooner than later depending on Apple’s next moves.

Today it’s a free-for-all, and marketplaces can blur the lines between marketplace, merchant, and payment processor to the point that the lines don’t even exist. But as those worlds continue to collide and consolidate, the accelerated advantage that the “marketplace” has to sell their own wares and tax competitors may tip the needle towards anticompetitive practices. No doubt, companies like Epic will continue to make that argument.

4. What to expect this holiday season with shipping

The world should prepare itself for an epicly large never-before-seen holiday season this year in terms of e-commerce sales, and delivery companies are getting ready for the surge.

DHL disclosed peak season surcharges that will range between 20 cents and $5 per package depending on various factors such as the parcel’s size, length of haul, and delivery time. The surcharges will begin on Oct. 3 and end on Christmas Day.

The United States Postmaster General, Louis DeJoy, has been busy recruiting shipping help for the holidays. DeJoy has recently visited Dallas, Chicago, New Castle, New Orleans, Norman, and Philadelphia where he promoted hiring efforts and investments in preparation for the 2021 holiday season.

UPS also announced that they aim to hire over 100k seasonal workers this year to support the anticipated annual increase in package volume that will begin in October 2021 and continue through January 2022.

Nando Cesarone, UPS President of U.S. Operations said, “We’re preparing for another safe, record peak holiday season. We plan to hire more than 100,000 people for seasonal jobs, many of whom will have an offer in hand within 30 minutes of applying.”

Treat your delivery people right this holiday season! They’re in for a busy one.

Consumers are finding themselves with increasing disposable income across the world in markets including Latin America, Central and Eastern Europe, Africa, India, and Southeast Asia.

A recent report by PayU entitled The Next Frontier explored online consumer spending across 19 high growth and emerging markets. Multichannel Merchant offered a summary, which I will in turn abridge even further below:

If you found that list above interesting, you might also enjoy this infographic by Visual Capitalist which showcases The World’s Fastest Growing eCommerce Markets.

Wix has completed the $200M share repurchase program authorized by the Board of Directors in May 2021, repurchasing 895,136 outstanding Wix ordinary shares (or about 1.6% of its total shares outhandling), at an average price per share of $223.41.

Lior Shemesh, CFO of Wix said, “Today’s announcement reflects our confidence in the continued strength of our business and our ability to successfully execute on our long-term strategy. Given our ample liquidity and Wix shares currently trading below what we believe to be our intrinsic valuation, we are able to return value to shareholders while simultaneously investing for growth.”

The campaign features QR code functionality on all assets, enabling shoppers to scan advertisements from Australian brands and shop their stores. The campaign was originally designed for a pre-locked down Australia, where Shopify powers more than 100k retail businesses.