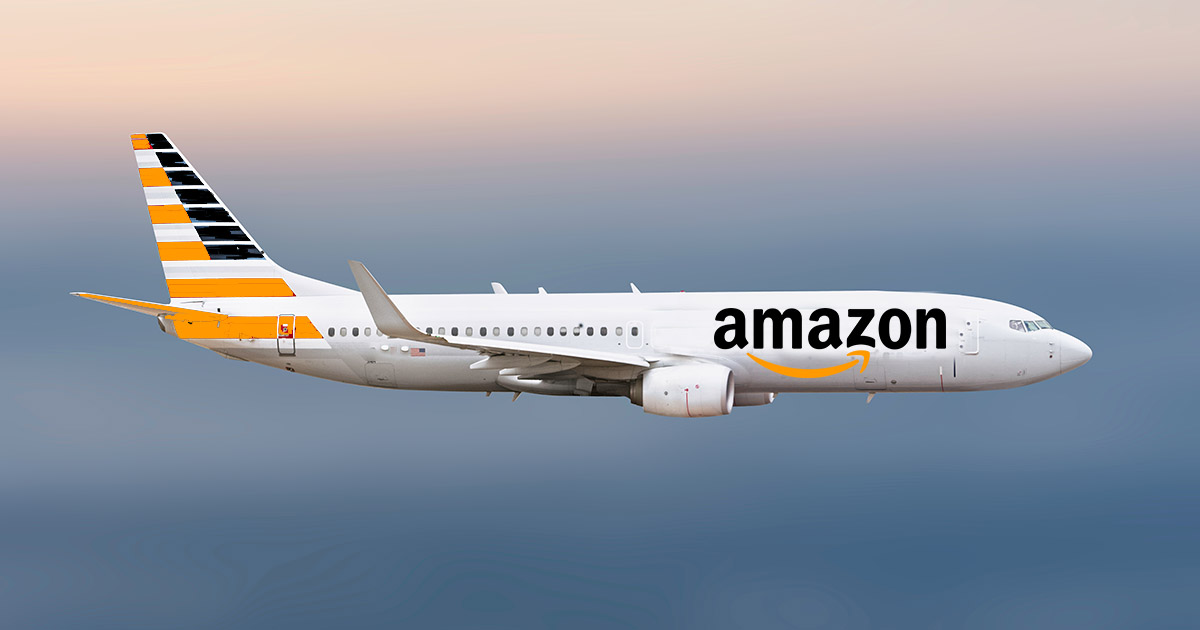 E-commerce shipping and logistics demand has officially outpaced traditional supply. For years, e-commerce sellers skated by within existing routes and infrastructures offered by USPS, FedEx, DHL, UPS and other carriers, but now delivery has become a whole new ballgame from the air to the last mile.

This week's newsletter covers a few stories that have to do with the changing landscape of delivery — from Amazon launching its own air fleet to NYC capping local food delivery fees.

As e-commerce, fulfillment, and delivery go hand-in-hand with one another, the three industries are expected to see massive growth and evolution over the next decade.

And now, it's my pleasure to present you with the 33rd edition of the Shopifreaks newsletter…

Amazon Air now operates out of 42 airports in the U.S., after it added regular flights to seven airports in the last six months. Amazon's growing wing-print enables the company to ship packages and inventory quickly to hubs that are then just a short delivery drive away from a significant portion of the U.S. population.

Shipping products to customers at record speeds has always been a huge part of Amazon's value proposition to customers and is proportionally a major expense for the company. Amazon spent more than $61B on shipping in 2020, up from $38B the year before. In comparison, that's 20x Shopify's total revenue in 2020 and 72% of FedEx's revenue in 2020.

Amazon launched its air fleet in 2016, but still currently relies on outside carriers like Atlas Air Worldwide Holdings and Air Transport Services Group to fly a portion of its packages, but that number is starting to shrink as Amazon brings air cargo operations in house.

People often compare Amazon to Shopify (and vice versa), but metrics like the above make you realize just how apples and oranges the two companies are. Amazon owning and operating their own air fleet and delivery company is miles ahead (and above) Shopify running a handful of fulfillment centers across the USA and relying on 3rd party delivery companies for the delivery. At the aggressive pace Amazon is moving, Shopify may be hiring them to deliver for their fulfillment centers in a few years.

Meanwhile, FedEx has launched FedEx International Connect plus (FICP), a new e-commerce shipping service that will allow retailers across ten markets to ensure that shipments will be delivered within 1-5 business days within Asia, Middle East, and Africa.

The service will be “day-definite” which means that FedEx will be able to reliably track delivery across borders down to the last mile while offering retail partners and their customers tracking, notifications, and flexibility to change delivery options.

The battle of international delivery is heating up!

3. Revolut hops on the BPNL train

Revolut, a Britain-based financial services app comparable to PayPal, is planning to launch their own Buy Now Pay Later services. The company is working on a checkout feature that will allow its 16M customers to spread the cost of any purchase made using its cards.

Their idea of execution involves a button which customers can switch on and off to turn their credit cards into BNPL, allowing them to pay a third now and then the other two installments two weeks apart. The products are still in early development and are likely to be trialled across European markets next year.

Revolut's plan to enter the BNPL market comes just a few months after it became Britain's most valuable private tech company in history with a $33B valuation.

4. Best Buy is expanding to compete in new markets

Best Buy, which famously put out of business Circuit City and RadioShack through their commission-less sales staff and aggressive expansion, has historically focused on consumer electronics, however, the company is now setting their sites on new consumer markets to compete with the likes of Amazon and Walmart.

Last week Best Buy began selling a range of electric bikes and scooters on its website, ranging from a $799 Segway electric scooter to a $2,649 electric bike from SUPER73. This expansion follows the company having begun selling health monitoring equipment, fitness gear, and 3D printers over the past 5 years.

Best Buy CEO Corie Barry revealed on their Q2 earnings call last week, “We have expanded our assortment in categories like outdoor living as more and more consumers look to makeover or upgrade their outdoor spaces. This includes products like patio furniture, grills, fire pits, and electric mowers, to name a few.”

Is Best Buy smart to expand into new consumer markets or should they stick to electronics? Hit reply or tweet at me and let me know your thoughts.

Facebook Pay is venturing out beyond its borders and has now landed on the Shopify platform as a way for customers to purchase goods. (As if Shopify stores needed one more payment button! LOL)

As I reported in June, Shopify's Shop Pay system became available to retailers selling on Facebook this year as well — so it seems that the two companies have shaken hands and opened up a two way street for their payment systems to reach wide adoption across each other's platforms.

Perhaps we'll see a spin-off in the future combining Facebook Pay + Shop App into its own fintech giant. That would make it one of the largest (if not THE largest) fintech app in the world and collectively rival the valuation of its parent companies Facebook and Shopify on its own.

The New York City Council approved a legislation to permanently cap commissions that food delivery companies like UBER, DoorDash, and GrubHub can charge restaurants on orders. The bill will restrict fees to 15% per delivery and 5% for advertising and other services. The companies are expected to fight against the price controls according to a Reuters report.

Last year, several U.S. cities, including New York, imposed temporary caps on commissions, which were as high as 30%, to help restaurants cope with the pandemic. San Francisco has already implemented permanent commission caps of 15% on each delivery order.

While I agree with NYC that some of these delivery app's rates were ridiculously high, restaurants certainly aren't required to use those apps to offer delivery to their customers — which restaurants have been offering for years.

The delivery apps argue “brand awareness” and “new customer acquisition” as part of their value proposition to restaurants — which has merit — but shouldn't that mean that the fees reduce significantly after a customer's first order with a restaurant?

I view the local food delivery market as a previously emerged tech that's quickly becoming a commodity — and the market usually decides the price of commodities. The technology to power your own online ordering process is available as a SaaS through companies like Olo, while startups like The Drivers Cooperative are taking control of local delivery back from big tech and putting it into the hands of local markets. (Disclosure: I'm an investor in both Olo and The Drivers Cooperative.)

While I respect New York City and San Francisco for attempting to protect the interest of small businesses and consumers from monopolistic delivery fees, I feel that competition and consumer choice are already doing the job on their own.

For example, as of April 2021, DoorDash starting offering lower-priced delivery options for US restaurants through a basic plan that charges 15% per order for delivery and shifted more of the delivery cost to customers. On the flip side of the coin, customers have become well aware of the outlandish delivery fees and are opting to order direct from restaurants on their websites. As restaurants catch up with the demand for online ordering and delivery that was spurred by the pandemic, more options for local delivery as a service will emerge, bringing the cost down even further.

Do you think local governments should cap the fees on food delivery or let the market decide? Hit reply or tweet at me and let me know your thoughts.

7. Lightspeed is on a hiring spree

Lightspeed Commerce is reportedly beating Shopify when it comes to hiring new people. The company advertised 2,600 jobs in the first eight months of this year — including 591 jobs in August compared to Shopify's 71 job listings.

Both companies were founded at similar times in Canada — Lightspeed in 2005 and Shopify in 2006 — and have found themselves competing over overlapping market share more and more over the years as Shopify moved into POS terminals and Lightspeed moved into e-commerce.

For comparison, Shopify has around 7,000 employees to Lightspeed's 2000 employees, so it'd be a safe argument to make that Shopify already completed the first round(s) of the talent draft and don't need to hire as rapidly right now.

Shopistry, the headless e-commerce platform that recently raised $2M, announced a new integration with Square that enables merchants to launch web stores and mobile apps that are fully integrated with Square Online and Square Payments.

Gabriella Hernandez, Head of Partner Management at Square, said, “Partnering with Shopistry will help provide even more ways  for our sellers around the globe to run and adapt their businesses, especially as they grow and look to deliver unique experiences without creative limitations in a post-pandemic environment.”

PS: Which crayon at the Crayola factory is in charge of answering the phones? … Yellow.